An inexpensive valve and 20 minutes of labor can prevent scalding.

Which is worse, scalded skin or Legionnaire’s disease? Until 2006, many homeowners had to ask themselves that question. It has to do with water temperature. Water in a water heater should be hot enough to kill microbes such as Legionella bacteria. It should also be cool enough that it doesn’t scald your skin. There is a happy middle ground, but it’s surprisingly narrow; 120 to 125 degrees F. There is some controversy about this: OSHA recommends temps at least 140, but the Consumer Product Safety Commission sets the limit to 120. Skin will scald at 130 within 30 seconds.

The thermostats on most water heaters can’t get close to that precision. That’s why you had to choose; a little too cool or a little too hot?

Happily, there is an attractive third choice, a temperature mixing valve, or TMV. Attractive because it is easy to install and not horribly expensive. You can pick one up at a home center for around $150. The valve goes on the pipe coming from the water heater, and mixes it with water from the pipe that goes into the water heater.  Here is a YouTube I found on the interwebs: YouTube Mixing Valve 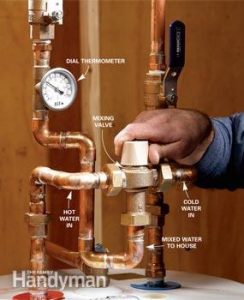 Do not be too concerned about making the connections to the existing pipes. There are relatively new products that make the installation fast and easy. To learn more about them, click: Here

How does a water softener work?

You get to clean gutters! How cool is THAT?

Frost in attics and why you should care