Ground Fault Circuit Interrupters are outlets that will shut off before someone gets a nasty shock if something goes wrong and the user is touching something that is grounded, such as a faucet on a kitchen sink. You know what they look like; they are those outlets you find in the bathroom that has buttons. If you look closely, there are little labels that say “test monthly” (BTW, you should test them monthly. No, I don’t either. But we’re supposed to.)

In 1975 they were required in bathrooms and garages.

In 1987 the areas were expanded to crawlspaces, unfinished basements and kitchens within 6′ of water.

In 1996 all counters  in kitchens and bathrooms.

In 2008 the requirements were expanded to the outlets that served garage door openers. And the new codes due in 2020 will include sump pumps.

Nowadays, the outlets are tamper-proof and self test. The little buttons don’t exist. If the self test fails, the outlet stops working and has to be replaced. You can’t repair it.

A lot of lives have been saved by these devices. They work very well and are not expensive. You don’t need special tools or knowledge to replace your outlets, but an electrician  wouldn’t charge too much for the work.

And you only need one outlet per run. Just make sure that the GFCI outlet is “upstream” of the other outlets, and the rest of the line will be protected, too. 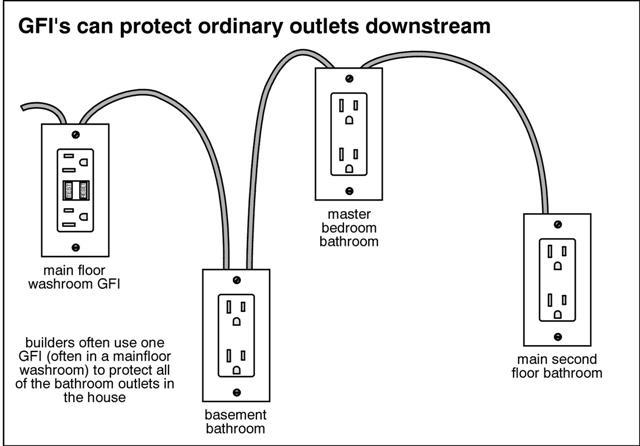 A case for backup sump pumps