How are you going to work the term “trap suckout” into a discussion?

Those pipes that stick straight up from the roof are called plumbing vents. Depending on the age of the house, they are usually either cast iron or white PVC. They don’t have caps, because nothing bad happens if some rain gets in. They should end at least 12″ from the roof. Longer is okay, but there is an increased chance that moisture in the escaping air will turn to frost, and temporarily block the end. That problem will solve itself when the sun warms and melts the frost.

Great news. So, what do they do?

I’m going to quote from Wikipedia;

A sewer pipe is normally at neutral air pressure compared to the surrounding atmosphere. When a column of waste water flows through a pipe, it compresses air ahead of it in the pipe, creating a positive pressure that must be released so it does not push back on the waste stream and downstream trap water seals. As the column of water passes, air must freely flow in behind the waste stream, or negative pressure results. The extent of these pressure fluctuations is determined by the fluid volume of the waste discharge. 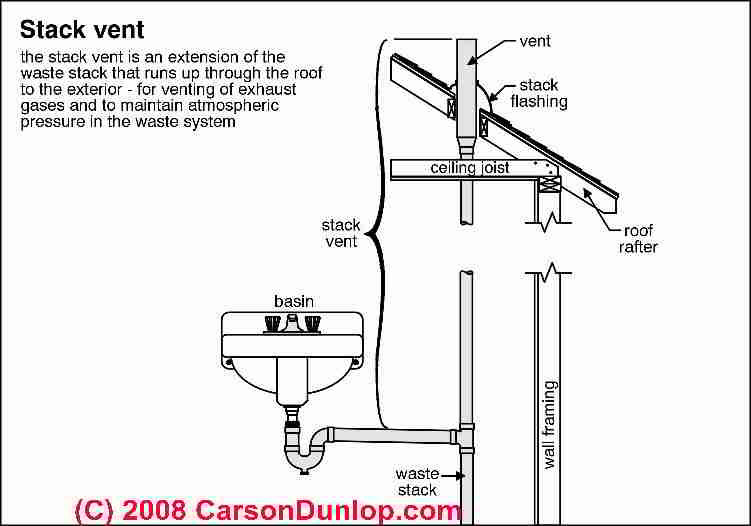 Excessive negative air pressure, behind a “slug” of water that is draining, can siphon water from traps at plumbing fixtures. Generally, a toilet outlet has the shortest trap seal, making it most vulnerable to being emptied by induced siphonage. An empty trap can allow noxious sewer gases to enter a building.

Does that make sense? By letting air into the system, the dropping water doesn’t pull water from the traps. Empty traps let sewer gas into the sink or toilet.

The “slug” of water that Wikipedia refers to is what causes a thing called “trap suckout”.

Want to see a cool video? Me too. But let’s stay out of trouble and watch a YouTube about plumbing vents. Click: Plumbing Vents.

If you’re like me, (and I know I am!), you’ll want to thank me for this blog by leaving a favorable review on Yelp. It will only take a minute, and would help me out A LOT!

What level should I set my humidifier to?

Asbestos in the home