I was picking up a radon monitor at a house that I had inspected two days earlier, and met the seller.

She knew, of course, that I couldn’t tell her about what I had found in the inspection; I work for the buyer, and the report is confidential. I know I’d be curious about what a guy who just spent 4 hours looking through my house had to say!

I did compliment her on the high-quality CO monitor. I said that monitors are better than alarms because low doses of CO can be harmful, and the alarms only sound when the levels are high.

She shared the story of her sister’s brush with death. The sister felt fine, but suddenly staggered as if she were drunk, and had to be rushed to a hospital. Turns out, the chimney had gotten partially blocked, and she was suffering from CO poisoning. Fortunately, HCMC has a hyperbaric chamber. The folks said that by November of last year, they had seen more than 300 cases!

The woman I was talking to was passionate about CO safety. (Apparently, she’s rather fond of her sister. Huh.) Thus I was inspired to do a little research on the subject. There’s a lot I didn’t know!

For one thing, CO is hormetic.

That means a little bit is good, but more than a little bit, not so much. Ask me about my son-in-law’s dad jokes.

Oxygen is needed by the body, which uses it for fuel. Every single part of the body requires it, and our circulatory system adapts to fit the specific need. That’s why your arm gets big from carrying your toddler. The vessels and muscles respond to their increased need of oxygen. (I know you know that. Stay with me here, I’m trying to lay the groundwork for what you don’t know.)

Carbon and oxygen together have a total of 10 electrons in the valence shell.

If you understand that sentence, stop reading; you know more than you need to. It’s something about how the atoms act. CO and O2 act like each other, at least in some ways. The hemoglobin actually likes CO a lot more than O2, and O2 is crowded out. But when it’s time to feed the muscles, O2 provides the fuel and gets converted to CO2, which goes back to the lungs and gets expelled when you exhale. CO, on the other hand, just sits there, and blocks the path. Low levels produce something like drunkenness, because guess what? Alcohol does the same thing that CO does! Alcohol gets filtered by the body better, so while you might have a hangover, you’ll still be able to wake up the next day. (Finding the car is a different conversation. Try to stay with me.)

Low levels produce flu-like symptoms like nausea and headaches. Long term exposure can produce long-term health problems, although the data is incomplete. Recent studies show that exposure to levels as low as 9 ppm can seriously affect the body. For reference, it’s worth noting that a properly functioning kerosene heater produces 46-98 ppm 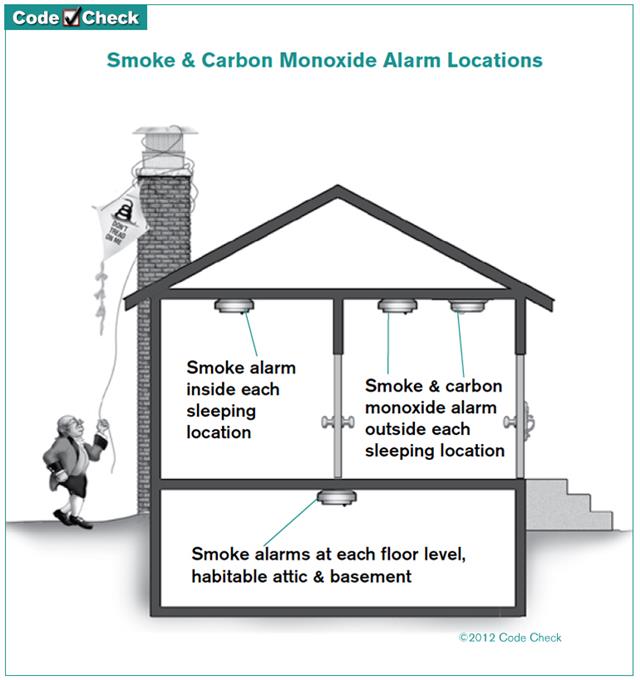 So tune up your fuel-burning appliances and make sure the ventilation works properly.  Have a CO alarm within (and outside of) bedrooms, and invest in a CO monitor that has a digital read out and can detect combustible gasses. Expect to spend about $100 for a good one. The best one on the market right now is a Nighthawk KN-coeg-3. It’s an AC powered alarm that has a 9-volt battery backup. CO isn’t lighter or heavier than air, so the alarm can be placed high or low.

Let’s not attach a deck to a cantilevered joist