Do I really need to worry about radon?

That’s not to say that radon isn’t real, because it is. It’s also invisible, odorless and deadly.

So why not worry?

For the same reason you don’t worry about getting hit by a train. At some point in your life someone convinced you that playing on railroad tracks was a bad idea. Do you remember? You were probably pretty young. A lot of people warned you with stories and pictures about the dire consequences of disregarding safety warnings. Remember “Stop, look and listen”? (Okay, so I played on the tracks, but that’s not the point. Stay with me here.)

My point is that if you did just a couple of things, you can rest assured that high radon levels are not, and will not be an issue in your home.

1. Test to see if the radon levels in your home are high.

2. Lower the levels if they are.

Well, sort of. The EPA says that you should re-test every couple of years, or if you remodel or before or after the house is sold, but you take my point. Want to know what the folks in England say about radon? Click UK radon stuff

But first, some basics.

Radon is a radioactive gas that is formed when uranium in the soil disintegrates. It gets drawn into your house because your house has a very slight vacuum. The vacuum is caused by a “stack effect”, where warm air rises to the top of your house.

Why is it deadly? 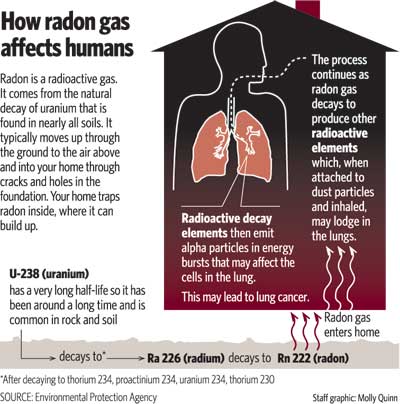 Radon breaks down(decays) and form “radon decay products” (RDP). As it decays from one form to another, Alpha rays are emitted. In that form, they cause damage to human and other cells.

But if you breathe them into your lungs at just the right moment, it could damage the tender cells and start cancer cells. If asbestos and/or smoke gets in your lungs, it’s the same thing. And a combination? Forget it.

Is there a safe level?

No. But lower levels are a lot better. Why? Imagine playing darts while wearing a blindfold. (I don’t have to imagine.   I’m the reason why Peter Liberko looks like he does. Sorry, Pete.) If you had one dart, you probably couldn’t hit the bull’s eye. But if you had a thousand (or a million) darts, and 24 yours a day for several years, you might. You might not. That’s where statistics come in.

This is boring. Get to what I have to do to lower the levels.

This part is easy, and not too pricey. A mitigating company (make sure they’re certified), drills a hole in your basement floor, and runs a pipe from the soil (where the uranium is, stay with me) through the roof, where it won’t bother you any more. They use a small fan, about the size (and about as loud) as the fan on your  laptop computer. The fan should be in the attic, in case the housing gets cracked. The cost goes from $1,000 to $4,000, usually around $1,500.

A lot of people have a short (2-day) test when they buy the house, because the seller might be inclined to cover some or all the cost of mitigation.

Having said that, a longer test will be more accurate, because there are more hours to sample. You can get a kit at the home center. Be sure to follow the instructions exactly.

The EPA has q lot of good information about radon in the home, titled EPA: Radon in the Home. Go figure.

What does “double-tapped” wiring mean?