Folks who spend a lot of time in kitchens appreciate a good kitchen exhaust fan. Heat, moisture and strong smells should be removed right away. But a fan that moves too much or too little air, or one that is too loud for normal conversation is hard to tolerate.

Today I’m going to explore some issues that relate to them.

That part is easy to understand, right? Ductless fans recycle the air and return it to the kitchen. It usually has a charcoal filter as well as a grease filter. The charcoal removes odors. It should be replaces once or twice a year. The grease filter should be checked often. You can clean it in an otherwise empty dishwasher or the kitchen sink with dishwater.

Ducted vents don’t trap odors, but send them outside, along with heat and moisture. So for most people, ducted ones are the way to go, if installation is possible.

This old House has good advice on how to install ducted vents. Click: Kitchen exhaust

The expensive ones move a fair amount of air, up to 750 CFM (Cubic Feet per Minute).

Consider whether or not that kind of air movement is in some way harmful to the rest of the house. Creating a vacuum in the home might cause the furnace and/or water heater to backdraft, where the exhaust from the appliance vents into the house instead of up the vent and outside. The solution is to provide a makeup air vent, which will allow fresh air to replace the air leaving via the vent hood. I found a GREAT article by Green Building Advisor that speaks to the subject: GreenBuildingAdvisor 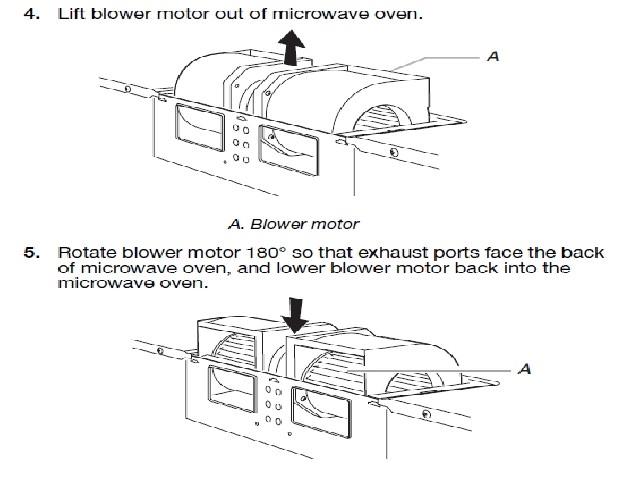 At a few inspections, I’ve noticed that the blower fan was installed backward. That is, the installation was for ducted, but no duct was supplied, and the air had nowhere to go.

Turning the fan around isn’t too terribly hard, but wouldn’t you think that the seller would have noticed that the air wasn’t moving?

Sometimes, the house is a “flip”, and sometimes I’m inspecting a brand new house. But not always. Sometimes, it’s been like that for a long time.

The fan style in the picture on the left is the way to go; Those are called Centrifugal blower Centrifugal blowers, also known as squirrel cage blowers. They are more expensive then air ring (AKA blade fans), but cost less to run and are a lot quieter. 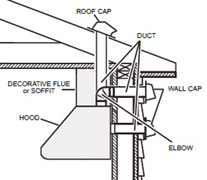 Speaking of which, try to avoid small exhaust fans. It might seem backward, but consider; a large fan that is run at a slower speed is a lot quieter than a small one at top speed. Another consideration is vent size. The larger fans require larger diameter vents. A lot of the noise in a kitchen hood comes from the fan, but not all. The sound of the air being moved is a BIG player. Also, consider terminal placement; The fewer bends the better. For that reason, straight up through the roof is your best option.